I have to recommend anyone to go see ‘Walking with Dinosaurs – Arena Spectacular’. I saw it on Friday at the Birmingham NIA with my parents. It was incredible! I had heard it was amazing and it was even more than I expected.
You cannot help but sit there beaming ear to ear, with panicked excitement in your wide eyes as you hear a thunderous, growning roar that vibrates through the stands, knowing a dinosaur is on the way to the stage. And they were real. Don’t notice the motor block undernealth them that is camouflaged the same colour as the floor, or the legs of the humans inside the Raptors, let yourself believe and they ARE real! They eat, protect their young, fight and charge at each other. Gigantic moving, living, blinking, breathing dinosaurs right before your eyes. I was left open mouthed as a huge 56 foot long Brachiosaurus slowly entered the arena, it was like that joyful moment in Jurassic Park when they see the long-necked dinosaurs for the first time – pure magic! It’s head and ET-like skin glinting in the spotlights, you got a sense of the otherworldy that made you feel 12 years old, your heart overflowing with awe.
The talent and skill that must have gone into making these creatures was just excellent, and the set design and lighting effects were brilliant; changing in such ingenious ways to represent the land growing and dying, regenerating in a rainbow of glowing colours, and responding to blazing fires and dramatic storms, accompanied by thrilling and powerful music, all coming together for such an impressive, memorable show.
It was a spectacle to behold, and made you want to stomp and roar as you left! I couldn’t help but wonder if one day they will create dinosaurs for real, the way we might gather again like a circus, and how the T-Rex may not be so well behaved as the anamatronic version! 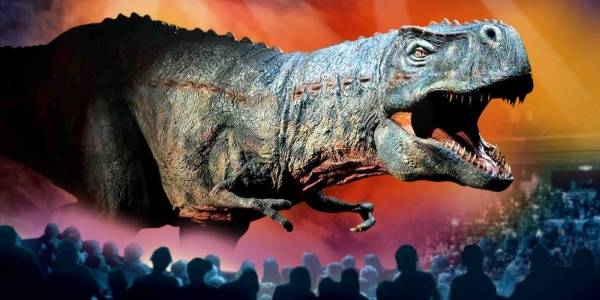