Here is a really cool shot taken by Rob Southall at his studio, when I was over in Birmingham for a few days at the end of January; it was a really enjoyable shoot. I love the angles and reflection he captured, with all the resulting geometric shapes picked out in bold contrast to the dark shadows. 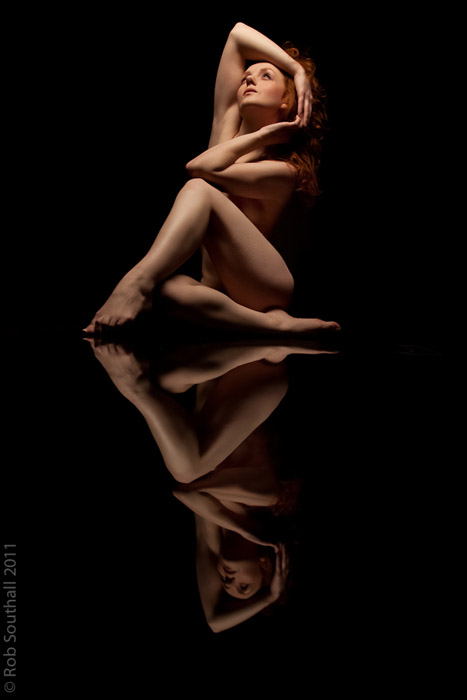 Wowee I have so many images to post from over the last month or so, I’ve been lucky to receive a few images from most of my shoots, I can hardly keep with them, but it’s great! I’ve been a busy bee so far this year, and where on earth did February go? I know it’s a few days shorter but already the year is whizzing by. It’s March already!

I’ve been working lots but I’ve also done some fun stuff in my spare time. Last weekend I had the Sunday off and I drove with my boyfriend to Wimpole Farm, near Cambridge, to see their little baby piglets – awwwwww!!! I have serious affection for any animal with a snout, and piglets especially have a lot of love from me. Maybe it’s from loving cute little Piglet from Winnie the Pooh when I was young. There were some giant rare breeds too, huge boars, a bit scary. The white piglets were just a week old, and so sweet, bouncing around like puppies in the yard, or snuggling under the heat lamp inside. There was a little pink runt who was really tiny – he had to clamber over the others to get a look in at feeding time – utterly adorable. It was cuteness heaven!!! ♥ They were so curious and came up to the side of the pen to stick their snouts through and snuffle your hand. There was a week old calf and little curly haired goats too. And I had green tea with lemon and scones with clotted cream in the cafe. So yeh that all made me very happy!! 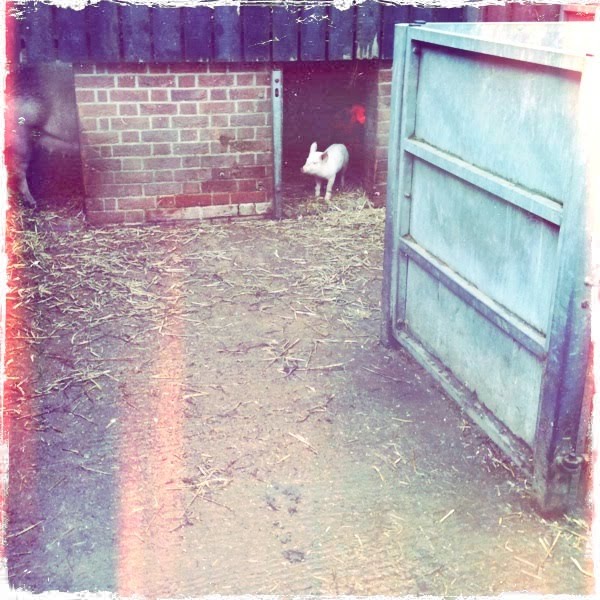 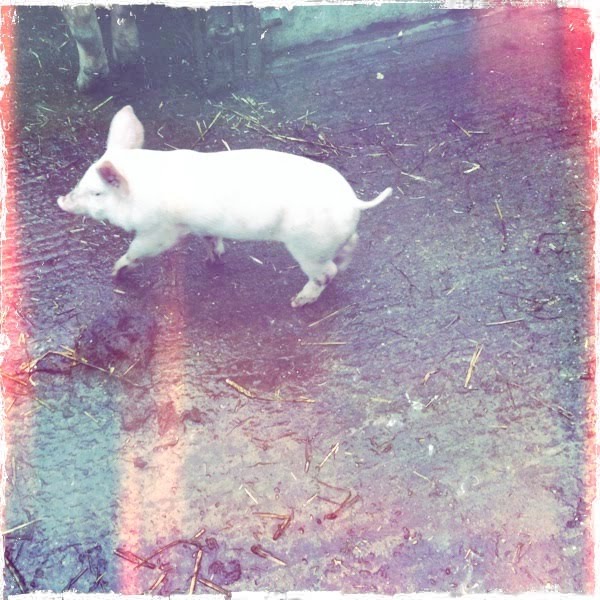 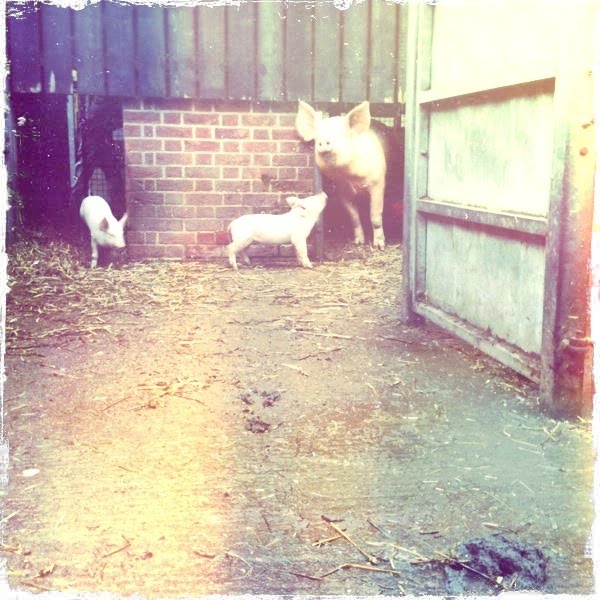 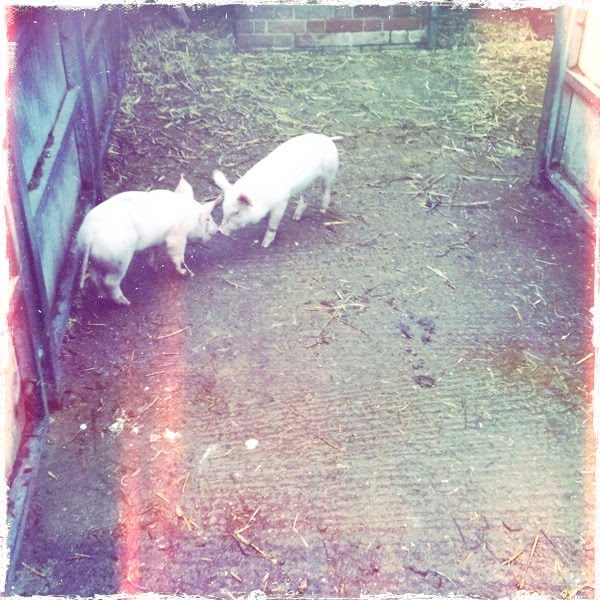 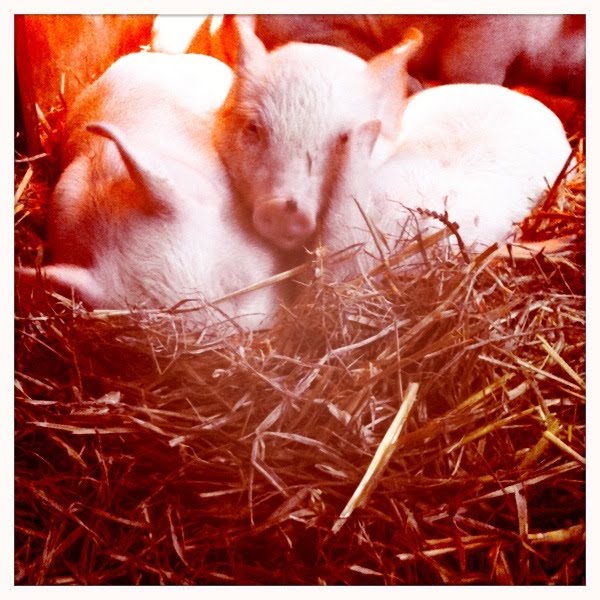 I also had a lovely day in London last week… caught the train in, watched the world go by, read my book, went to a casting, then headed to the Natural History Museum to see the Wildlife Photographer of the Year exhibition which I always try and visit. I had to queue a while because it was the school half term and all the kids were going to see the Dinosaur exhibition. But it was sunny weather and the bumblebees were buzzing in the flowerbeds so I didn’t mind waiting and the show was so worth it. Awe-inspiring and as moving as always. Incredible images of this planet we are on and the creatures we share it with. So thankful these committed photographers capture it for us to see. Amazing nature. You forget how incredible it is, it floors you everytime! I love reading all the text, especially in the endangered and photojournalism categories, and the memorable experiences of the photographers, plus all the technical infomation – it made me wanna buy a new camera! 🙂

These were my favourites… 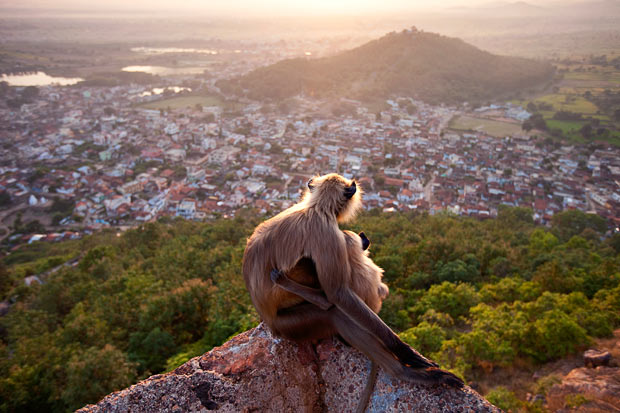 Squeezed out of their forest homes by deforestation and the spread of human habitation, overlooking Ramtek in Maharashtra, western India, Hanuman Langurs find the highest point from which to admire the sunset. 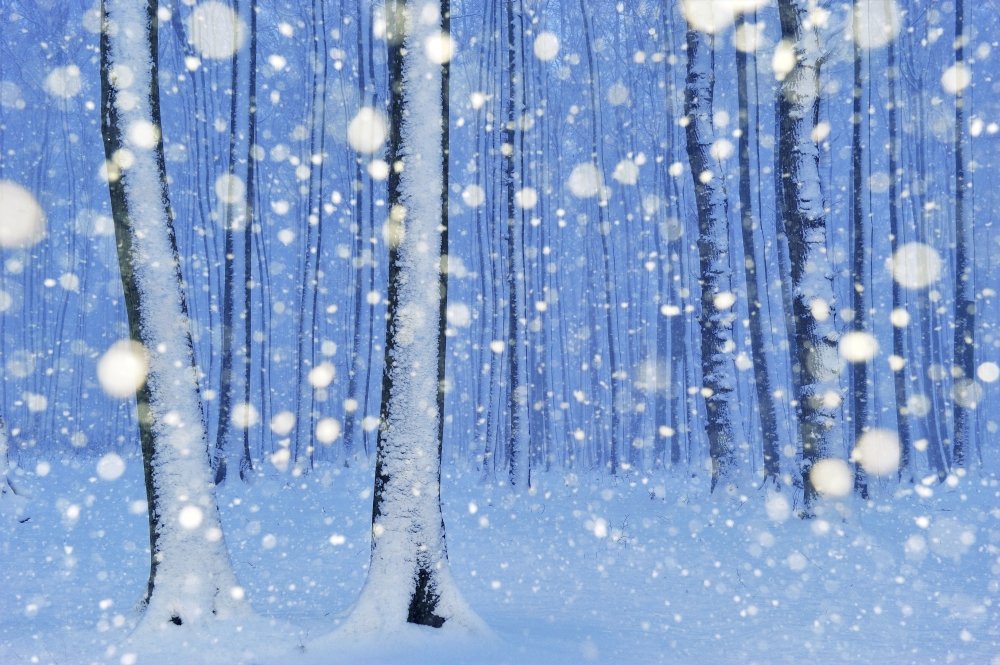 Gespensterwald (ghostly forest) is an old beech forest near Nienhagen, Germany. It is buffeted by winds from the Baltic Sea, and these have contributed to the lack of ground cover and the forest’s reputation as a spooky place. For Sandra, however, the forest is ‘utterly beautiful’. After a heavy snowfall in January, she spent the day alone in the forest. ‘It was so silent,’ she says, ‘that I could hear my heart pounding.’ But it was only when it started to get dark and the snow began to fall again that she had the chance to create the surreal composition she hoped for, with the trees disappearing into snow and a curtain of large, magical flakes falling in the foreground. 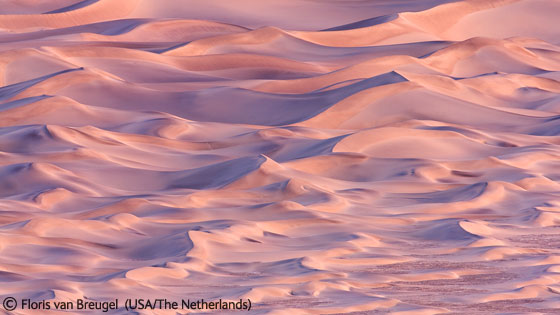 Sunrise bathes the Mesquite Sand Dunes in California’s Death Valley National Park in pinks and oranges and creates the shadows that emphasize the wind-whipped dunescapes. To avoid any detail and a sense of scale, Floris stationed himself a good distance away, overlooking the valley, and used a telephoto lens. ‘The sensual forms and ever-changing nature of sand dunes fascinate me more than any other landscape’. 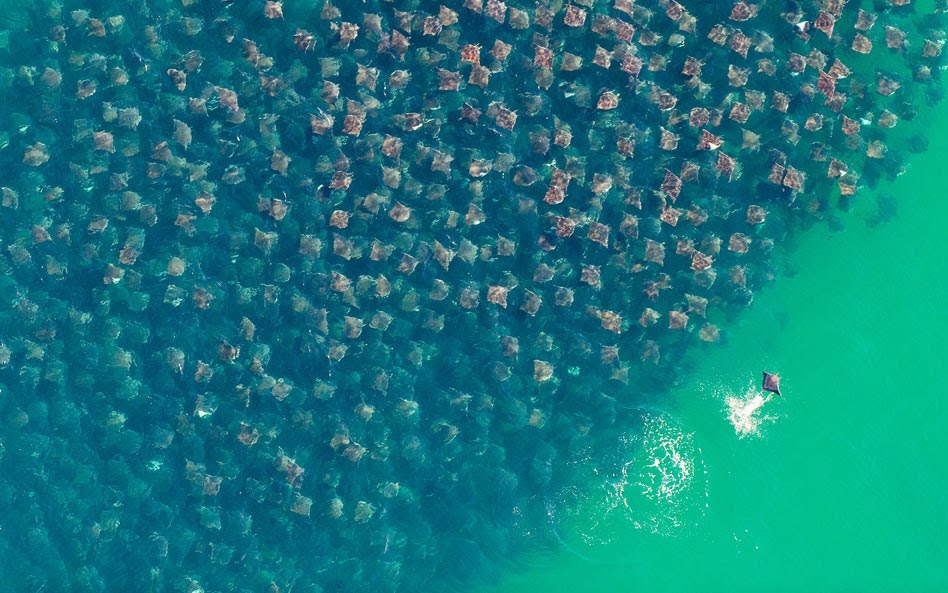 This astonishing aerial view of a massive congregation of Munk’s Devil Rays was taken over the Sea of Cortez, Baja California, Mexico. It’s not unusual to see these smaller relatives of the manta ray somersault out of the water – locals call them tortillas because of the way they slap down into the water. ‘When I first saw this wildlife phenomenon from the distance,’ says Florian, ‘I was not sure what I was looking at. The ocean was boiling. It was hard to tell how many rays there were, because the shoal must have been as thick as it was wide.’ No one knows why the rays gather like this, whether to mate, herd prey or migrate or just for the sheer joy of being together. 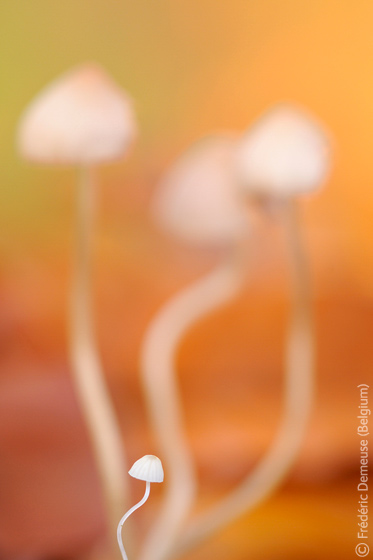 Frédéric Demeuse – Ephemeral gGift
Category: In Praise of Plants
‘I made the tiniest toadstool the subject of the composition, positioning it so that its shape was echoed by the central big one behind – a projection of what the little one would look like very soon. A gift from nature.’

So after buying, of course, some beloved postcards from the shop, I went and caught the tube to my job at Adrian Pini’s Studio in Brent Cross. But it still felt more like play than work, as the shoot was with amazing textile artist Catherine Burrows, who takes photographs and then works on delicate fabrics like silk and japanese paper to create amazing images with evocative, ethereal feelings of memory. Here are some examples of her work… I look forward to seeing more from this lady! 🙂 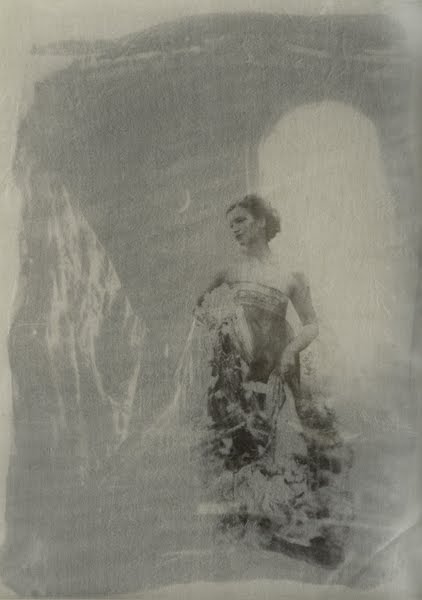 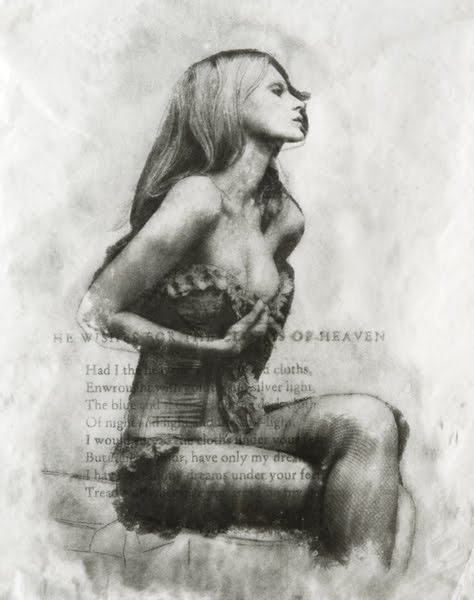 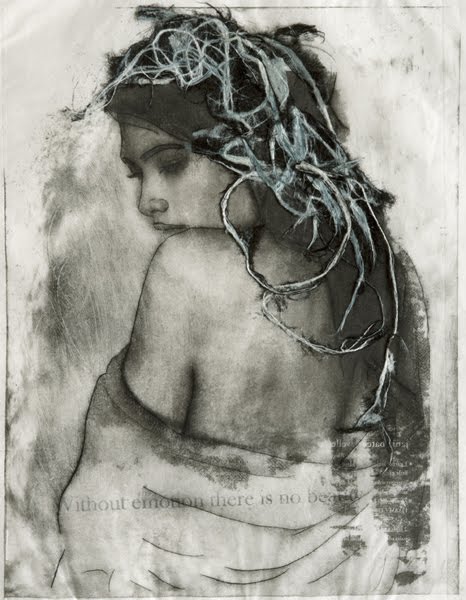